The sweet smell of Boysenberry pies is in the air once again as Knott’s Berry Farm revives one of their most beloved attractions. The all-new interactive ride KNOTT’S BEAR-Y TALES: RETURN TO THE FAIR picks up 30 years after the original as if the bears had never stopped baking their award-winning pies. Housed in the same show building as before, now made to look like a whimsical pie factory, RETURN TO THE FAIR uses the same track layout as the previous Voyage to the Iron Reef, and adds more 3D screens, a lot more practical sets, and a sense of immersion. Man oh man have we missed these charming critters. This is a triumph of nostalgia married with high-tech wizardry, and it’s just plain fun. As our ride begins It’s the day of the fair and Crafty Coyote is still after those delicious berry-filled confections. This time, however, Crafty has an army of rascally pups to help him pinch the pies from the factory, and guests are enlisted to help retrieve them on the way to the big fair! Boarding the newly remodeled ride vehicles passengers sit four across and are asked to take charge of their very own boysenberry jelly shooters. Off we go into the factory when all of a sudden, Crafty and his crew burst in and begin to snatch pies up. There’s no time to waste as we trail the parade of coyote pups through the Frog Forest, the Gypsy Camp, and even the Thunder Cave. The scenes are in the same order as they were in the original attraction, just new and, this time, interactive. Will riders be able to stop Crafty and his clan from stealing all of the pies before we get to the fair? You will have to ride for yourself to find out. Of course, if you know anything about Bear-Y Tales, you know the ending is sweet. 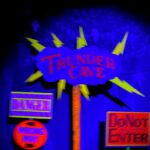 As one who rode the original attraction repeatedly and begged for its return in some form, this is great. Well, it’s more than great, really. This is a high-tech update that doesn’t scream high-tech. Beautifully crafted scenes pay homage to the charm and whimsy of the original version of the ride and to the creativity of its original designer, Rolly Crump. The creative team captured the look and feel of these beloved characters from Boysen and Girlsen Bear right down to the floppy feel of the lanky frogs. Knott’s did this right. They spent the money and dressed the attraction up with beautiful practical sets and effects and immersive elements that actually compliment the 3D action on the screens in the ride.

Purists may wrinkle their noses at the inclusion of the 4-D shooter technology or they may pine for the days of 100% practical sets but trust us, this is good. This is Bear-Y Tales 2.0. This is Bear-Y Tales for a new generation and we believe that this will be here for years to come. Thank you to the folks that finally heard the fans and gave new life to this beloved attraction. Nicely done.

Now, will they do something interesting up there for Haunt? We shall see. This is the birthplace of the theme park haunt after all and we are eager to get back into the fog. In the meantime, we are happy to get back into Bear-Y Tales. Guests will get to ride this new attraction when Knott’s Berry Farm re-opens on May 21st You can visit their website to purchase tickets and make a reservation for your visit.

Below we have interviews with Ride Producer Eric Nix and Kenyo Smalling Manager of Games at the park, along with a full ride-through of the attraction. If you want to avoid spoilers though, skip the ride through.

Norm(an) Gidney is a nearly lifelong horror fan. Beginning his love for the scare at the age of 5 by watching John Carpenter's Halloween, he set out on a quest to share his passion for all things spooky with the rest of the world.
By Norman GidneyPublished On: April 30, 2021Categories: Knotts Berry Farm, Theme Park NewsComments Off on KNOTT’S BEAR-Y TALES RETURN TO THE FAIR a Triumph for Knott’sTags: KNOTT'S BEAR-Y TALES, knott's berry farm